Andy Belser comes to the University of Arizona from Penn State University where he was a Professor of movement, voice and acting in the MFA Performance program. At Penn State he was also Director of the Arts and Design Research Incubator, a studio laboratory where artists and designers join with scientists, writers, philosophers and others to research and create artistic projects for national/international venues. 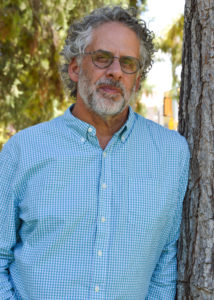 Andy created and directed FaceAge, a multi-media installation and series of documentary films exploring aging questions in cross-generational interactions that toured the United States. Through his work with the FaceAge project, Andy was honored to serve as the Penn State Laureate in 2017-2018.

Belser was the founding Artistic Director of The Gravity Project, a professional theatre company, international performance research center, and new work incubator. Belser’s teaching and directing career has centered on devising new work and revisioning classics, movement forms, voice/breath work, interdisciplinary theatre approaches, and solo work. He regularly directs and mentors new projects, particularly solo work, and is the director of Michelle Krusiec’s award-winning solo play Made in Taiwan. He is a certified Feldenkrais® practitioner, a Master Teacher of Fitzmaurice Voicework®, and Creative Director for the Fitzmaurice Institute.

Belser is currently writing a book The Performer’s Field Guide to Applied Neuroscience, scheduled for 2020 publication by Routledge. Belser maintains an active schedule of teaching acting workshops and individual actors in New York, Los Angeles, and other international locations.