Brad Richter is the executive director and co-founder of Lead Guitar. Equal parts performer, composer, and educator he has made nearly 1,000 concert appearances in North America and Europe – more than 50 of which were aired on NPR’s Performance Today. 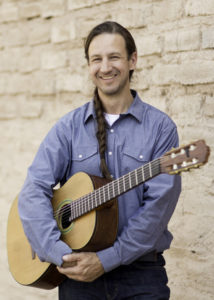 Since completing his Master’s degree in classical guitar at The Royal College of Music in London, Brad has performed around the globe with artists such as nine-time Grammy winner David Finckel. Brad is the winner of the National Fingerpicking Championship, the International Composer’s Guild Competition, and the National Music Teachers Association’s commissioned composer award, and he was the first guitarist ever to win the Royal College of Music’s Thomas Mohrherr Prize. He is a sought-after collaborator with artists such as cellist Viktor Uzur with whom he tours as the Richter Uzur Duo, his former mentor from the Royal College of Music, Carlos Bonell, and Broadway star Ben Vereen, as well as The Pacifica String Quartet and The Phoenix Chorale. Brad also enjoys several long-term collaborations as an artist-in-residence, including more than a decade with the Aspen Music Festival and School.

As a composer, Brad is known for his own brand of genre-mashing chamber music. Winner of the International Composer’s Guild Competition, his major commissions have included Navigating Lake Bonneville, a concert-length work for Weber State University; Duo Concerto for Cello and Guitar, co-written with Viktor Uzur for the Jackson Symphony Orchestra; Fragments Transcending, premiered by David Finckel; Devil in the Details, commissioned by the National Music Teachers Association; and the musical score for an episode of the Emmy award-winning PBS series The Desert Speaks. Brad’s collections of concert music for solo guitar are published by Mel Bay, Acoustic Music Records, GSP, and Sky Island Music.