Olivia Miller, curator of exhibitions at the UAMA, began serving in the role of Interim Director in July of 2022. 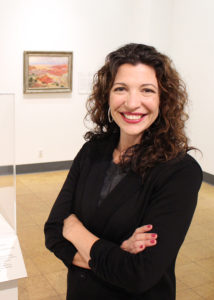 Miller joined the museum in 2012, initially as Curator of Education, overseeing the docent and education programs before becoming Curator of Exhibitions in 2014.

In addition to reinstalling the permanent collection galleries, Olivia has curated more than 30 exhibitions during her tenure.  In 2021, the exhibition, The Art of Food: From the Collections of Jordan D. Schnitzer and His Family Foundation, was the UAMA’s largest in over a decade, was accompanied by a bilingual catalogue, and will travel to other museums in Portland, Oregon, and Oklahoma City, Oklahoma.

Miller presides over Restored: The Return of Woman-Ochre, the Willem de Kooning painting that was stolen in 1985, recovered in 2017 and restored and returned to the museum in 2022.